When I started beta testing the LEOMO system in November, I was immediately attracted to the possibilities of using it both indoors and outdoors. Indoors, we can quantify movement and joint angles without having to use a fit studio (e.g., traveling to a team camp or your house to do a fit). Outdoors, we have endless possibilities to see what happens with an athlete’s bike fit while riding in real life conditions. Riding with LEOMO is similar to riding with a power meter when you first test it out. You take it on rides and learn what the data is telling you and how the system behaves.

I was so impressed using this with high school mountain bike athletes, I purchased a system in January and started taking it for rides on my local mtb trails, where the data was much different than indoors while riding on a fixed trainer or on the road.  The initial theory I’ve been coming up with is that the body acts like so much of a balancer and shock absorber during dirt riding the joint angles vary WAY more. More testing on this is coming up using the CX bike with a power meter to perfectly dial in the intensity and see if any of the sessions on the mtb correlate.

I wanted to share how we’ve used LEOMO in the wild to analyze and help three of our Tempo athletes!

I shared about working with Bev Chaney in our last race report at the Timed Events Day at Velosports Center in Carson, CA. Bev had a really good day and both athlete and coach were happy with where she was for March.  Bev’s husband shot some footage of her 2K ride and we were chatting about her going up-track in the turns, a common small loss for riders. I found an interesting correlation by looking at her LEOMO file and seeing the small adjustments in Foot AR, Leg AR, and especially, Pelvic AR with a 20 degree change each turn! It’s normal to see bursts in power each turn on a track but this was surprising to see it expressed biomechanically. Bev’s helmet slipped a bit in the turns and she felt this might have contributed to the change, but wow that is a huge change in her torso angle!  Using data such as this from her LEOMO file enabled a great feedback loop to help Bev improve her technique. 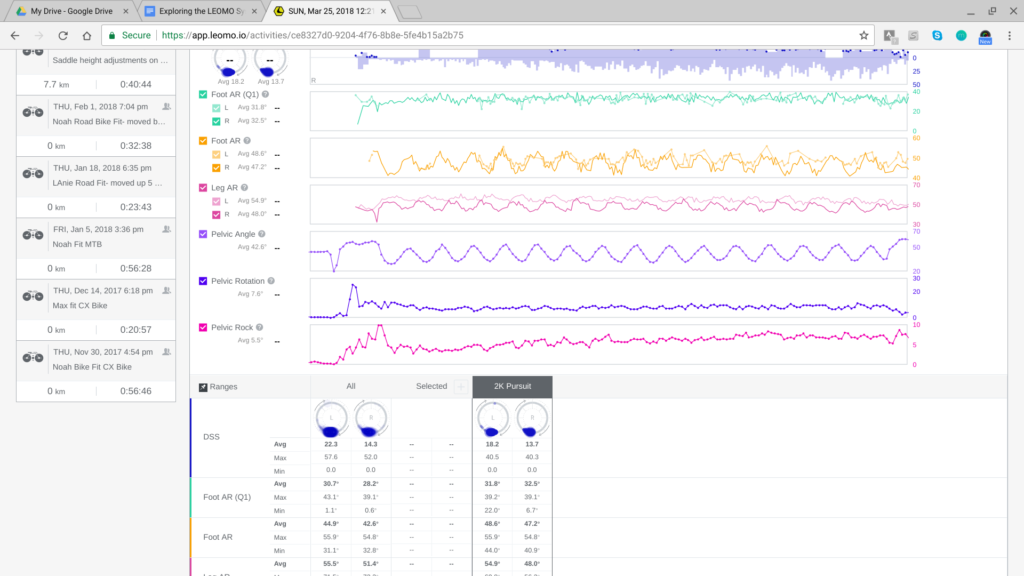 Next up was a long ride with long time Tempo athlete, Christian Gomes. Christian is moving into UCI level racing this year with the Ride For Rendall team. He has matured TREMENDOUSLY as a rider in the last year, especially training very hard and balancing a demanding life as a second year student at Quest University in British Columbia. Christian is based  in BC and works with a local fitter there, so I was very happy to take the opportunity when he was recently down in Oxnard for a long training camp to get him out for a ride, see him in the wild, and attach some LEOMO sensors to gather some data on his biomechanics.

It was fantastic to see Christian and also to look at his overall efficiency while pedaling, especially at the end of an almost 3 week block of big miles and climbing.  Christian’s numbers (on the left side of the screen) were very well balanced, one of the best I’ve seen. His DSS or Dead Spot Score was excellent! 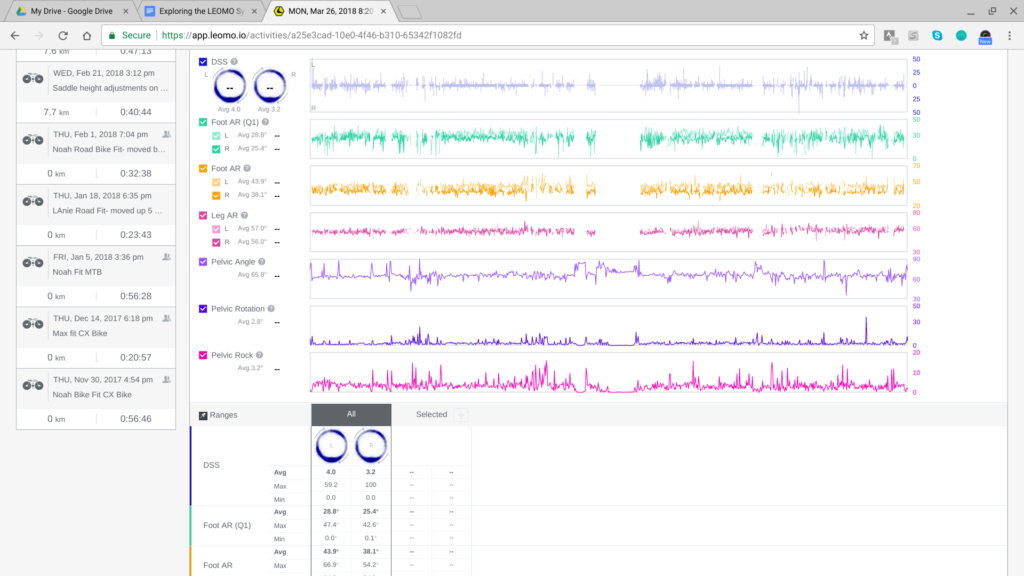 I then took a look at Dara Richman, a local enduro racer who is also an exceptionally gifted Physical Therapist.  Dara recently acquired a new Specialized Crux CX bike and despite the old Crux being perfect for her, the new one never felt right.  We arranged some time for a fit in my backyard before while in the neighborhood for a scheduled ride in Marin.  One of the nicest things about the LEOMO system is its complete ability to do a fit or position check anywhere, even my backyard!  We were able to raise her saddle 5 mm and adjust the stem taking weight off her hands and letting her sit “in” the bike a bit more, closer to her position on her enduro bike.

Dara is constantly addressing some imbalances driven from a tight hip.  This issue was  obvious in her LEOMO file – her Foot AR Q1 (or first quadrant of pedaling), her Foot AR or ankle drop, and her Leg AR or thigh angle, all showed an imbalance between the left and right sides.

While Dara definitely knew about her mobility impingement going in to the fit, it’s interesting to quantify it and see if a program of getting a proper bike fit and combined strength and mobility can decrease the issue . It’s also nice to have the rider ride outdoors after the fit and check the numbers in real life conditions. 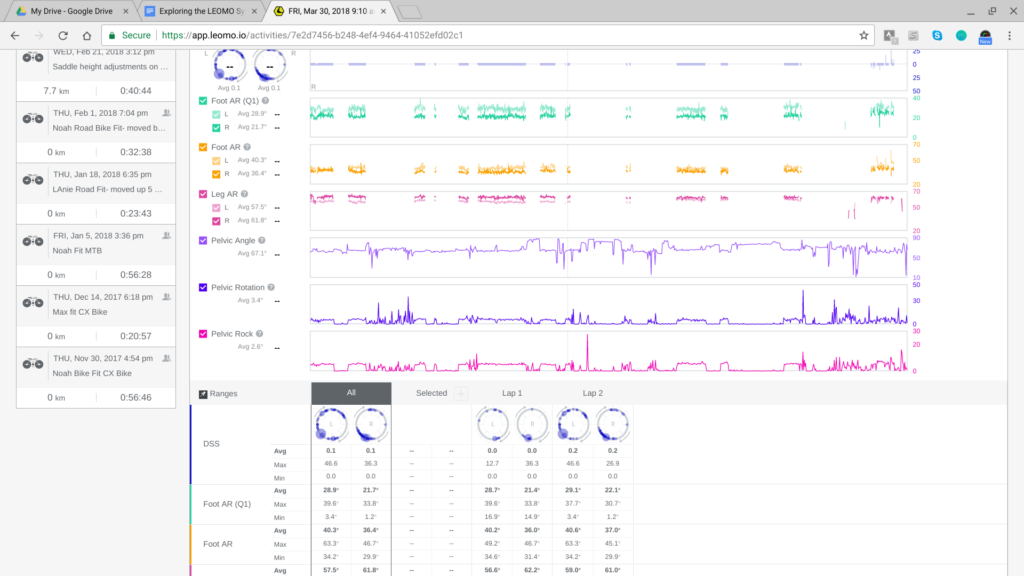 Curious to learn more and try a LEOMO bike fit yourself?