Beautiful day at Granite Bay on Sunday for Race # 4 in the Norcal HS League .

Pre ride showed the sandy hero dirt was nicely tracked from the North Conference races the day before, singletrack was well bermed and a fast day looked to be in store. The back sections with rock gardens weren’t too heinous, but realistically what  challenges one can manage on a chill pre ride and what a rider might have trouble with 3 laps into a full gas race is a bit different. On sections like this SOMEONE will bobble and have to run, its important enough to use a bit of valuable energy to stay in front of a faltering rider, and the inverse tactic is try to manage your space and the pace  a bit if you ARE that rider that’s not having a great day by staying in control and in front.

Varsity Boys have seen some great racing this year, with the emergence of Nate Davis ( Monterey Lightfighters) moving up , Rylan Loader ( Salinas Cowboys) being a smart sprinter , and Roberto Cribley( Berkeley) using his technical riding skills to hang on, the races with less climbing have been much more tactical, especially in the early laps.

With Noah Hayes in San Dimas for the Bonelli Park XCO  and XCT races on Saturday and Sunday, Max Mcfadden(two 2nds and a hotly contested 3rd) was the pre race favorite in Varsity Boys. Max responded well to the pressure and when the start gun went off quickly took the lead. Soon a group formed with Max, Nate Davis,Rylan, Roberto, Matt Garrison( El Cerrito) and the hammer went down with Nate Davis driving the pace upwards and slowly shredding the group down to three with one lap to go 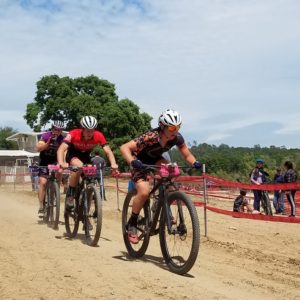 Props to Rylan Loader ( third in this pic)  who is getting in some hydration on this course! Fueling and hydration especially were key with the back half being challenging to find places to drink and played a part in some athletes fading in the later laps.

Last lap and there was a tangle in the last K causing Rylan Loader to come off, leaving it down to Max and Nate. Max led through the last hairpin sandy corner and held the lead with 150M to go out of the corner to the finish, Nate put in a solid run but came up a half wheel short.  Thrilling finish to a nailbiter for sure and a great wrapup to a fantastic day of individual efforts by so many riders!